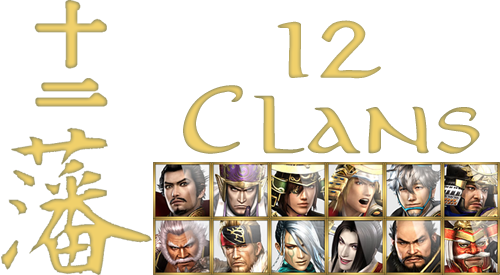 
In Twelve Clans (a Shogun type variant heavily inspired by the Samurai Warriors series of games) fight to expand your clan and become the dominant power in Japan. As you conquer rival clans, they will become your vassals (allied to you), but your vassals' true loyalties belong only to their own clan's interests. A clan will become vassal to another for self-preservation. If another clan conquers one of your vassals, their allegiance will change to the conquering clan. However, if you are conquered, your vassals will join you in switching sides.

Once you are defeated, you simply switch sides. If one of your allies wins then you win a minor victory. Beware! No one trusts a traitor, and if you or another clan switch sides to many times, you will likely be shown no mercy should your capital fall again... There can only be one shogun. If a player conquers 7 rival clans that player achieves Total Victory, becoming the shogun. Any players who are not the first 7 to join the shogun have lost.

In the 2 (Sekigahara), 3 (Coalitions), 4 (Triads) and 6 (Bloodpact) player alliance variants included the Vassal system is removed and the traditional alliance system is in place. You can choose to play this like any other game where multiple players can be a part of any particular alliance or one player can control the entire alliance. Once a clan is taken out in these variants, they are out for good. Victory in these variants is based on alliance control of 10, 9, 8, or 8 clan strongholds respectively (or all 12 if you are feeling frisky).