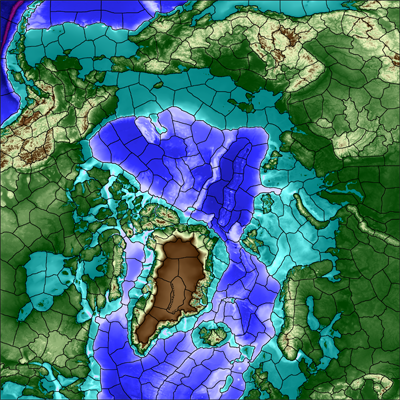 Welcome to the world of dead reptiles and avian ancestors.

The map is a low resolution image produced from NASA topological data.


The globe was rotated to center Iceland on the equator before slicing it open and laying it flat.
This reduces distortions for all land, since only water remains at the poles.
A small section of turf around Greenland is used for JURASSIC. Greenland's massive ice block makes it the perfect volcano for the Dimorphodon, one of the first Pterosaurs.
This location is impassable and the capital of Tithonia.
The players are named after the eleven periods of the Jurassic era.
Their positions on the board make game play more or less difficult.
This is reflected in the player list order with easiest on the bottom.
The top player is unique with a special dinosaur; Dimorphodon.
All other players have a full list of other dinosaurs from the Jurassic Period.
The first player is meant to be a nuisance; a leftover from the Triassic.
Even though the capital is impassable, you can still create but cannot return; like deamons emerging from the pit of Hell.

The map is colored for topologic elevation and not actual vegetation conditions. Sea level after the last Ice Age, ten-thousand years ago, was nearly 400-feet lower than today.
This is easy to see as the continental shelves (light blue areas). Sadly, all that topology has been washed clean.
Territory Effects are employed to allow land reptiles to swim, and ocean dwellers to flop around on land.
Study the Effects chart in the NOTES, or snap a screen shot and place it on your desktop for reference.
Territories are labeled with a Terrain Tag. Combat is based on 12-sided dice.
All creatures looking right are defense oriented.
Each dinosaur has advantages, and the project purpose is to bring dinosaurs into the Triple-A family.