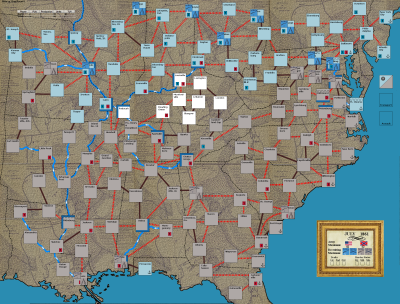 b.) Rough overview:
A strategic-level Civil War scenario adapted from a simple-yet-elegant
board game. Two players face off as the North and the South in the
American Civil War of 1861-65. Each has control of infantry and
cavalry units, which can be upgraded to stronger versions after
winning battles. Three generals -- Lee, Grant, and Sherman -- are also
featured. Players fight for control of territory with very different
victory objectives.

Much of the game is about maneuvering, as better position can trump
superior firepower, and things evolve in surprising ways. A system for
rail and river movement really mixes things up, and cavalry can jump
over defenders to wreak havoc behind enemy lines.

The North has lots of advantages, but the South has more ways to win,
giving each side a distinct flavor.

c) General tips:
AI play is not possible; human-vs.-human play only, online or via email.