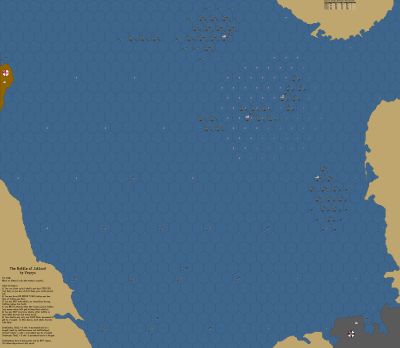 May 31, 1916, the two greatest navies in the world set sail to meet in the greatest and only full-scale clash of battleships in history.
The German High Seas Fleet planned to use its scouting battlecruisers to draw the Royal Navy's battlecruiser group of the Grand Fleet into a trap and destroy it before the rest of the Grand Fleet could arrive. The Royal Navy seeked to cut the germans off from their port, then use their numerical advantage to annihilate the Germans.

TO WIN:
Move an Admiral (your flag) into the enemy's capital.
You can do this by defeating your enemy's navy, or by sneaking around it with a fast task force.
Conquer the convoy zones to slowly turn the tide against your enemy (most worth 10 PUs each, some worth 20 PUs).

HOW TO PLAY:
This is a tactical game, which means each piece represents a single ship, instead of a navy.
Each nation is broken up into 2 players: Movement and Armament (Attack).
The Movement player first moves all of that nations ships around, as well as buying and placing any new ships, Then the Attack player moves the Shells, Torpedos, and Depth Charges to attack the enemy ships. The Attack player is simulating the ships firing their weapons at the enemy.
The armament (ammunition) used to attack the enemy is used up in the first round of battle and 'dies'.
Then, the Armament player then simulates the ships reloading their weapons, by placing new ammunition on each ship.

In order to make this a tactical game, we need to give players a good reason to spread out their fleets. Here are 2 very good reasons to spread out your ships:
1. You can only Reload (Place) up to 2 new shells/ammunition per turn PER HEX (any, every, and all hexes).
2. You may have NO MORE THAN 4 ships per hex, (Max of 4 ships per hex. Only applies to ships, does NOT apply to ammunition).
So this means that if you have 4 ships in a hex, and all of them fire at the enemy, you will only be able to 'reload' 2 of the ships. So next round, the 2 you did not reload will not be able to fire at the enemy.
Both rules are enforced by the game engine.


RULES:
1) You can Place up to 2 new shells per turn PER HEX (any and all hex), so you may wish to keep your units spread out.
2) You may have NO MORE THAN 4 ships per hex, (max of 4 ships per hex).
3) You can ONLY attack submarines with Depth Charges.
4) Only Submarines may carry Torpedos, and Torpedos may not travel through targets to get to a further target (Torpedos hit the first target in their path, while shells can fly over targets to reach further targets).
5) Battleships have 2 hit points, but do NOT repair. All other ships have 1 hit point.


TIPS:
* To switch between a Shell and a Depth Charge, just fire your shell/charge into the ocean during the combat-move phase, then place the new shell/charge onto the ship during the placement phase.
* You may Attack a sea hex with as many shells/charges/torpedoes as you want, (The stack limit is only on "Placing", which is basically just "reloading").
* Ramming into ships is pointless, your ramming ship will die and not do any damage to the rammed ship (This is intentional).
* Cruisers and Battlecruisers are the most effective means of hunting subs. Destroyers can not carry Depth Charges (in ww1 destroyers were anti-tboat units, not anti-sub units, destroyers did not become anti-sub units until ww2).
* You get +1 movement when moving away from your factory / naval base.
* To see the big picture, try using "Map Zoom" from the View menu at the top of the screen.

* To move subborn ships with the correct shells attached. Example: sometimes when you have multiple ship types and multiple shell types in the same hex, and you try to move a ship, the game grabs the wrong shell to go with it. If this happens, undo and try again moving just 1 ship at a time. If this still does not work, use edit mode's movement feature to move what you want where it is allowed to go. (To do this, go into edit mode, then click the action tab on the right by the stats tab, then edit mode will allow you to move units). This is very rare, as moving ships 1 at a time solves the problem most of the time.

* To switch from a Shell to a Depth Charge, or from a Depth Charge to a Shell. The preferred method is to fire your shells/charges into the ocean and let them die, then place a new shell/depth charge on the ship during the placement phase (therefore it is not needed to use edit mode).