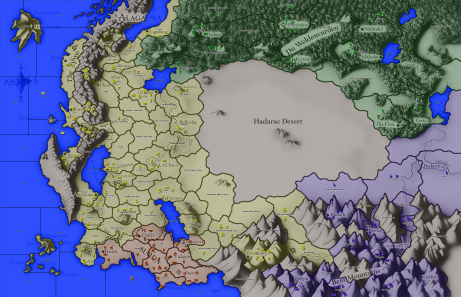 The Urgals are gathering on a march against Farthen Dûr bound by the spells of the Shade Durza. In the meantime, with the young Dragon Rider Eragon on her side, Nasuada, leader of the Varden, prepares to launch an invasion of the Empire of the evil Rider, King Galbatorix, using Surda as a base. Finally seeing a hope to dethrone the immortal Rider-King, Elves and Dwarves reveal their hidden realms and join forces with the Varden to strike at Galbatorix from all sides...

Lead the armies of the Varden to victory against Galbatorix - or crush all remaining resistance against your Empire, securing your rule forever... It is your time to decide the fate of Alagaësia in this scenario based on the Inheritance Cycle by Christopher Paolini.

Official thread: https://forums.triplea-game.org/topic/710/alagaësia
Created by alkexr.
Thanks to the members of the TripleA forum, especially to General_Zod, for playtesting, ideas and feedback during beta development.
Map art is the hand-drawn map of Alagaësia by Cristopher Paolini.
Download with TripleA Manual Download